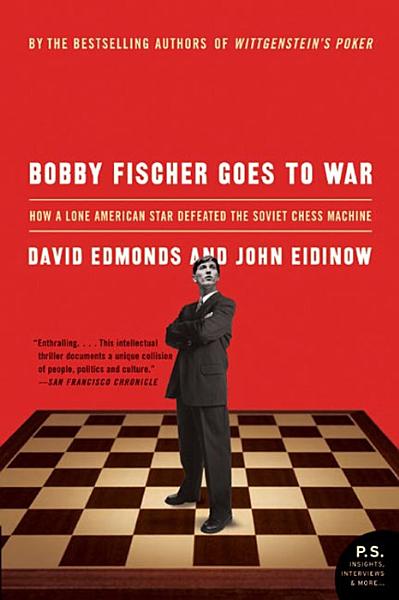 In the summer of 1972, with a presidential crisis stirring in the United States and the cold war at a pivotal point, two men—the Soviet world chess champion Boris Spassky and his American challenger Bobby Fischer—met in the most notorious chess match of all time. Their showdown in Reykjavik, Iceland, held the world spellbound for two months with reports of psychological warfare, ultimatums, political intrigue, cliffhangers, and farce to rival a Marx Brothers film.

Thirty years later, David Edmonds and John Eidinow, authors of the national bestseller Wittgenstein’s Poker, have set out to reexamine the story we recollect as the quintessential cold war clash between a lone American star and the Soviet chess machine—a machine that had delivered the world title to the Kremlin for decades. Drawing upon unpublished Soviet and U.S. records, the authors reconstruct the full and incredible saga, one far more poignant and layered than hitherto believed.

Against the backdrop of superpower politics, the authors recount the careers and personalities of Boris Spassky, the product of Stalin’s imperium, and Bobby Fischer, a child of post-World War II America, an era of economic boom at home and communist containment abroad. The two men had nothing in common but their gift for chess, and the disparity of their outlook and values conditioned the struggle over the board.

Then there was the match itself, which produced both creative masterpieces and some of the most improbable gaffes in chess history. And finally, there was the dramatic and protracted off-the-board battle—in corridors and foyers, in back rooms and hotel suites, in Moscow offices and in the White House.

The authors chronicle how Fischer, a manip-ulative, dysfunctional genius, risked all to seize control of the contest as the organizers maneuvered frantically to save it—under the eyes of the world’s press. They can now tell the inside story of Moscow’s response, and the bitter tensions within the Soviet camp as the anxious and frustrated apparatchiks strove to prop up Boris Spassky, the most un-Soviet of their champions—fun-loving, sensitive, and a free spirit. Edmonds and Eidinow follow this careering, behind-the-scenes confrontation to its climax: a clash that displayed the cultural differences between the dynamic, media-savvy representatives of the West and the baffled, impotent Soviets. Try as they might, even the KGB couldn’t help.

A mesmerizing narrative of brilliance and triumph, hubris and despair, Bobby Fischer Goes to War is a biting deconstruction of the Bobby Fischer myth, a nuanced study on the art of brinkmanship, and a revelatory cold war tragicomedy.