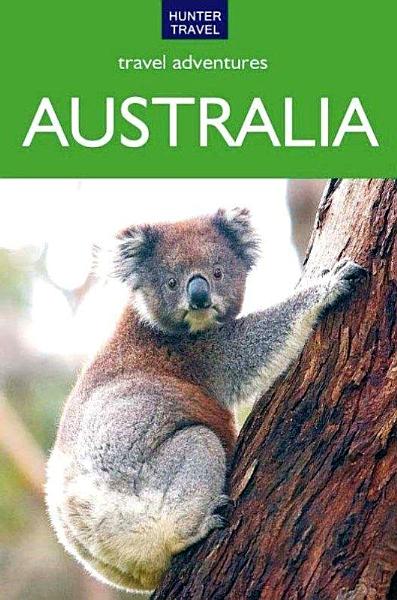 Following are a few quotes from this inspiring and astonishingly detailed guide. The author, a native Australian, covers everything you might want to know about Australia - guaranteed! The places to stay in every part of the country, from budget to luxury, rentals to B&Bs, the restaurants, from fast food to the highest quality, the beachwalks and bushwalks, the wildlife and how to see it, exploring the country by air, on water, by bike, and every other way. New South Wales is a candy store of adventure possibilities. Favorite short-term excursions include scuba diving, snorkeling, surfing, and boating, as well as ocean and river kayaking and whitewater rafting. On land, you can tackle park trails by foot, horse, mountain bike, or four-wheel-drive. Other options include mountain climbs, cave mazes, desert wanderings, and historic Aboriginal sites and settlements. Sydney is the main gateway to everything in Australia. Uluru, the massive orange, 1,097-ft/343-m monolith that billows out from the flat desert ground like a six-mi/10-km-wide loaf of untamed bread dough on a table, is certainly the Territory's -if not the continent's -most famous natural and cultural sight. Even from a distance, as you're driving along the Lassiter Highway through the dusty scarlet earth, its bulk overpowers everything along the horizon. At its highest point, the rock stands more than three times taller than the Statue of Liberty, 90 ft/28 m taller than the Eiffel Tower. And it's all just a single hunk of rock -mono (one), lith (stone); an ever-changing presence that dazzles from dawn to dusk as a natural theater for the various lights and moods of the desert. Kinchega National Park: Few natural areas are so truly amazing as this spread of wilderness stretching west from the broad Darling River. Within the boundaries are vast, shallow marshes around Cawndilla and Emu lakes, which turn into utter swamplands during the seasonal rains. Afterwards, the lake-laced terrain becomes a key nesting region for waterbirds, who leave the land to the kangaroos, wallabies, platypus, and frogs as it dries once again. Thredbo: Australia's best ski resort town is surrounded by an elegant backdrop of snow-covered slopes dotted with pine forests, charming timber chalets, and cozy coffee shops, boutiques, and pubs. Daring ski tracks are scratched down the hillsides, paralleled by nearly a dozen long, ropey lifts gliding upward toward unseen heights. Australia's Northern Territory is a vast land of contrasts, stretching from the beautiful reefs and tropical rainforests at the very top of the country down through the amber deserts and dusty golden plains of the Red Centre. In the north, the land is edged by a melding of languid mangrove swamps and smooth white beaches. Brilliant corals spread out beneath the waters, lining coves split by wide brown estuaries. Rivers snake from the coast down through thick woodlands and deep canyons, dwindling in width as they reach the drier plains. Here, the north Australian Outback is the true, endless Land of the Never Never. The modern city of Brisbane, with its shining skyscrapers and grand, colonial-style buildings, is actually an inland town squeezed between the looping curves of the Brisbane River. Set 15 mi/25 km back from the Pacific coast, the city and its suburbs are home to some 1.6 million people who enjoy living in this serene environment of lush parks, rugged river cliffs, and quiet marshes. It's the river that gives the settlement its character, its undulating route separating the glitzy downtown area from the sections of pretty, garden-encircled, cafe-infused suburbia. Even a half-century ago, however, Brisbane was just another sleepy tropical town. Founded in 1823 and named for Scotsman, soldier, astronomer, and later governor Sir Thomas Brisbane, the city slowly expanded alongside the river which also carried his name.